What is the Coward Punch and how do we put an end to One Punch attacks?

What is a Coward Punch and how do we end one-punch attacks?

Inflicting death and countless life-altering injuries, the Coward Punch is a serious and widespread problem in Australia.

1. The meaning of the Coward Punch

What is a Coward Punch?

A Coward Punch is a is a strike to the head or neck that is unprovoked and delivered without warning, often from behind. It often knocks the victim unconscious, with further risk of head trauma when hitting the ground.

The incidence of the Coward Punch in this country and its toll is truly frightening:

What is the king hit and why was it changed to Coward Punch?

The term king hit, believed to date back to the late 1800s in Australia, refers to a single, unfair blow intended to knock someone out quickly.

Although king hit, one punch and worse still, sucker punch typically describe a knockout blow, they don’t convey the cowardliness of punching an unsuspecting person.

The push to refer to king hits as Coward Punches gained momentum in Australia in 2014 after the assault of 18-year-old Daniel Christie at Kings Cross. As he lay in a critical condition in Sydney’s St Vincent’s Hospital, his family said in a statement: “We don’t agree with the popular term king hit.”

“We have heard it referred to as a Coward Punch, which seems to be more appropriate.”

The then NSW Police Minister Mike Gallacher was reported as saying he agreed with the use of the term Coward Punch, to help embarrass and shame attackers.

How the term Coward Punch is changing attitudes

The term Coward Punch was even in contention for the Australian National Dictionary Centre’s Word of the Year in 2014, as a nod to terms making their way into mainstream discussion.

At the Pat Cronin Foundation we believe there’s a marked difference between a king hit and a Coward Punch. We believe in calling Coward Punches out for what they are in order to promote community awareness.

To understand how words – and specifically “Coward Punch” can shape attitudes,  check out our interview with ANDC director, Professor Amanda Laugesen.

2. What happens to the brain after a sudden, unexpected blow

How does a Coward Punch cause death?

Frighteningly, one punch is all it takes to kill someone or leave them with a life-changing injury.

When someone’s head is punched, the impact makes their brain hit their skull. The brain may then rebound and hit the other side of the skull – with the “rattling” damaging and tearing the soft tissue.

Bleeding inside the skull or brain, or hemorrhaging, can be deadly without immediate treatment.

These are just some of the medical effects of one punch to the head:

Without fresh blood, it takes just eight to 10 seconds to lose consciousness. After four to six minutes without oxygen, the brain begins to die. If this doesn’t result in death, it will result in brain damage*

While the Coward Punch figures are alarming, they’re only a fraction of the problem.

The Pat Cronin Foundation’s Ben O’Toole, who speaks about his own experiences here as a Coward Punch survivor.

Ben required specialist surgery to alleviate dangerous swelling of his brain. Three holes were drilled in the side of his head and a piece of skull “opened like a door” to reduce the pressure.

“Six weeks post op I had an appointment with the surgeon who saved my life. Having seen the extent of my injuries at the time of the operation, he was surprised I wasn’t in a wheelchair and able to engage in a conversation,’’ says Ben.

Many victims are not so “lucky”. Many have been permanently mentally and or physically disabled from assault – requiring neurosurgery and prolonged intensive hospital care.

According to studies, half will not have returned to work two years after the injury, one in three will need assistance with basic skills such as banking, shopping and transport, while two in three will suffer from psychological problems including depression, anxiety and reduced self-esteem.

Many of the bedridden are reduced to living in permanent care, away from their families.

Does alcohol consumption increase the risk of injury from a Coward Punch?

Alcohol impairs the ability to react to an incoming punch or attack, or anticipate the signs of danger, especially in noisy, crowded, or dark social settings.

Additionally, relaxation of the muscles around the neck while intoxicated causes the victim to be less resistant to the punch, causing greater damage to the major arteries of the neck.

3. The toll on those left behind

The impact on victims’ families, friends, and communities

It’s the night Pat was delivered a fatal blow to the head while coming the aid of a mate while on a night out in Melbourne in 2016.

As the video, above, so poignantly captures, it’s “every parent’s worst nightmare”.

“He went out to a café in Diamond Creek. Little did we know what was going to happen that night and that our lives would change forever.”

The impact of Pat’s death on his local community provided impetus for the establishment of the Pat Cronin Foundation.

In recounting the excruciating aftermath of Pat’s death, Matt says: “The next day we opened our doors – 250 people came and just wanted to give us a hug.

“That was the seeds of the Pat Cronin Foundation.”

The impacts on perpetrators of violence

The lives of perpetrators of violence can change in a split second as well, with jail terms, criminal records, employment difficulties, travel restrictions as well as destruction of relationships with friends and family and long-term mental health implications.

You might need for a copy of your criminal record for instance to apply for a job, work with children, or even work as a volunteer.

Only Tasmania and the Northern Territory have anti-discrimination laws that specifically protect against discrimination due to a criminal record.

If you have a criminal record and want to travel overseas, you will have to check that country’s entry conditions.

4. The problem with the legal system

This has colloquially been referred to as the Coward Punch Law. Each state’s laws specify the definition and conditions of this criminal offence.

The Pat Cronin Foundation believes laws around “one punch mandatory sentencing provisions” need to be tightened.

We’ve met with both the Attorney General and the State Opposition in 2022 in Victoria to press the point, although neither side has so far committed to a strengthening of the current legislation.

In Victoria, one-punch deaths carry a 10-year minimum jail term. However, these provisions have been rarely used.

We believe most of the perpetrators of such attacks can avoid minimum sentences because the legislative thresholds for prosecution are too high.

What is the one punch law in Victoria?

Interpreting the Crimes Act and trying to state the law is tricky business. The following links might help you in your own research, but it is in no way legal advice.

The Victorian law now stipulates that all cases of manslaughter by unlawful and dangerous act involving a single punch, or a strike delivered to the victim’s head or neck, which causes injury to the head or neck, automatically constitutes a dangerous act. Section 4A, Crimes Act 1958 (Vic)

As if dealing with the personal fallout from a fatal or life-altering Coward Punch, victims’ families can also find themselves navigating a complex legal system.

The Cronin family’s experiences with the system after Pat’s death is now the subject of an upcoming documentary, due for release in 2023.

A trailer of the film, above, highlights what the family believes is a lack of rights for the victims of crime, as well as their families.

“The moment Pat died he became a piece of evidence. We’re not even recorded as victims,” says Matt.

According to Robyn: “I realise how naïve we were. For several weeks after Pat’s death we didn’t even bother looking into the legal side of things.

“We had no concept of all the kicks we would get along the way. I didn’t expect it to be pretty, but it was far worse than that.”

5. Our vision and how we can all help end the Coward Punch

We believethe keys to ending the Coward Punch lie in education, awareness and research.

Education: A whole-of-school education program to heighten understanding and triggers and consequences of social violence, to make such behaviour socially unacceptable.

Awareness: Strong messages to the community build awareness of the prevalence and impact of Coward Punch attacks. Again, this empowers the community to make violence socially unacceptable.

Research: The Victorian Institute of Forensic Medicine report (referenced earlier in this article) provided the first base of evidence for legislation in Australia. This highlights the importance of research.

Our vision for the future – what is the Pat Cronin Foundation doing about ending the Coward Punch?

With the Foundation growing rapidly, we’re now setting our sights on expansion nationally, extending our reach to young Australians everywhere.

On an individual level, there are many things we can all do to help end the Coward Punch. They include:

Managing social conflict is a vital life skill at all ages. Let’s eliminate social violence by teaching all young Australians about risks, choices and consequences. Click here to discover other ways to get involved.  Book a Be Wise presentation here or email us at info@patcroninfoundation.org.au

You can also keep up to date with all that’s happening on Facebook. Be wise. Think carefully. Act kindly.

What is a king hit and why is it referred to as a Coward Punch?  A King Hit is the same form of attack as a Coward Punch – a strike to the head or neck, often delivered from behind, usually unprovoked and without warning.

The term King Hit has been replaced with the term Coward Punch to reflect the shame a perpetrator should feel.

This stigmatises rather than glorifies the act. Altering our language contributes to changing the culture: it aims to deter people from engaging in this type of violence because they will be labelled a coward.

What is a sucker punch?  A sucker punch is a surprise punch, and not normally considered “fair”.

What is a one-punch death? A One Punch Death describes the tragic outcome of when a person is fatally attacked with a Coward Punch and dies from the injuries sustained during the attack. 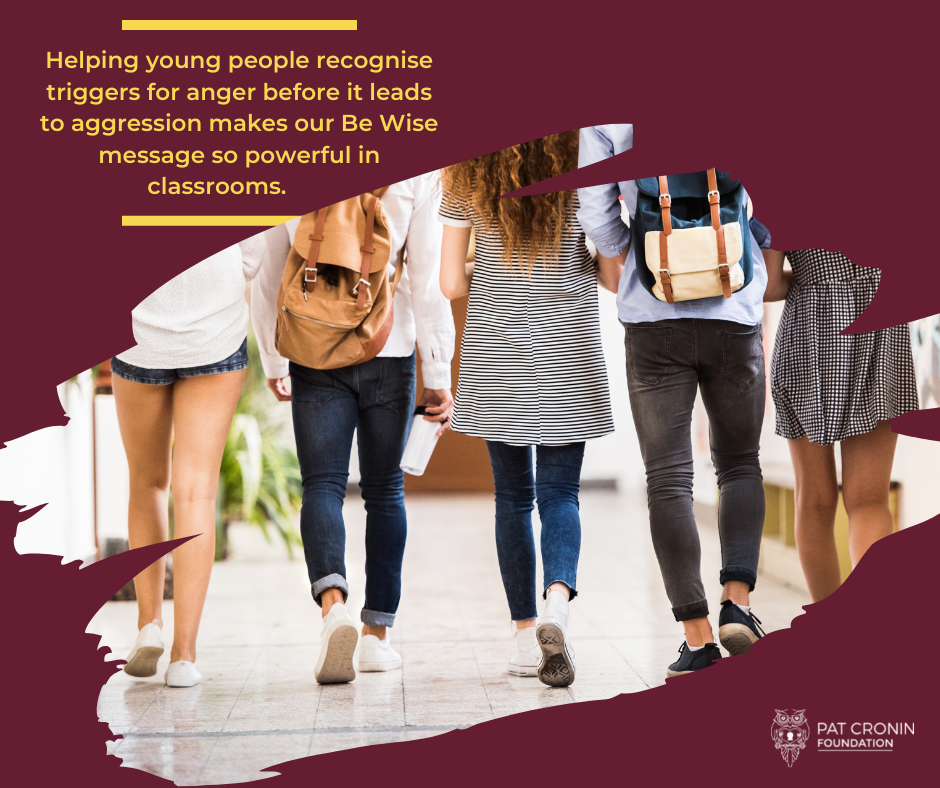 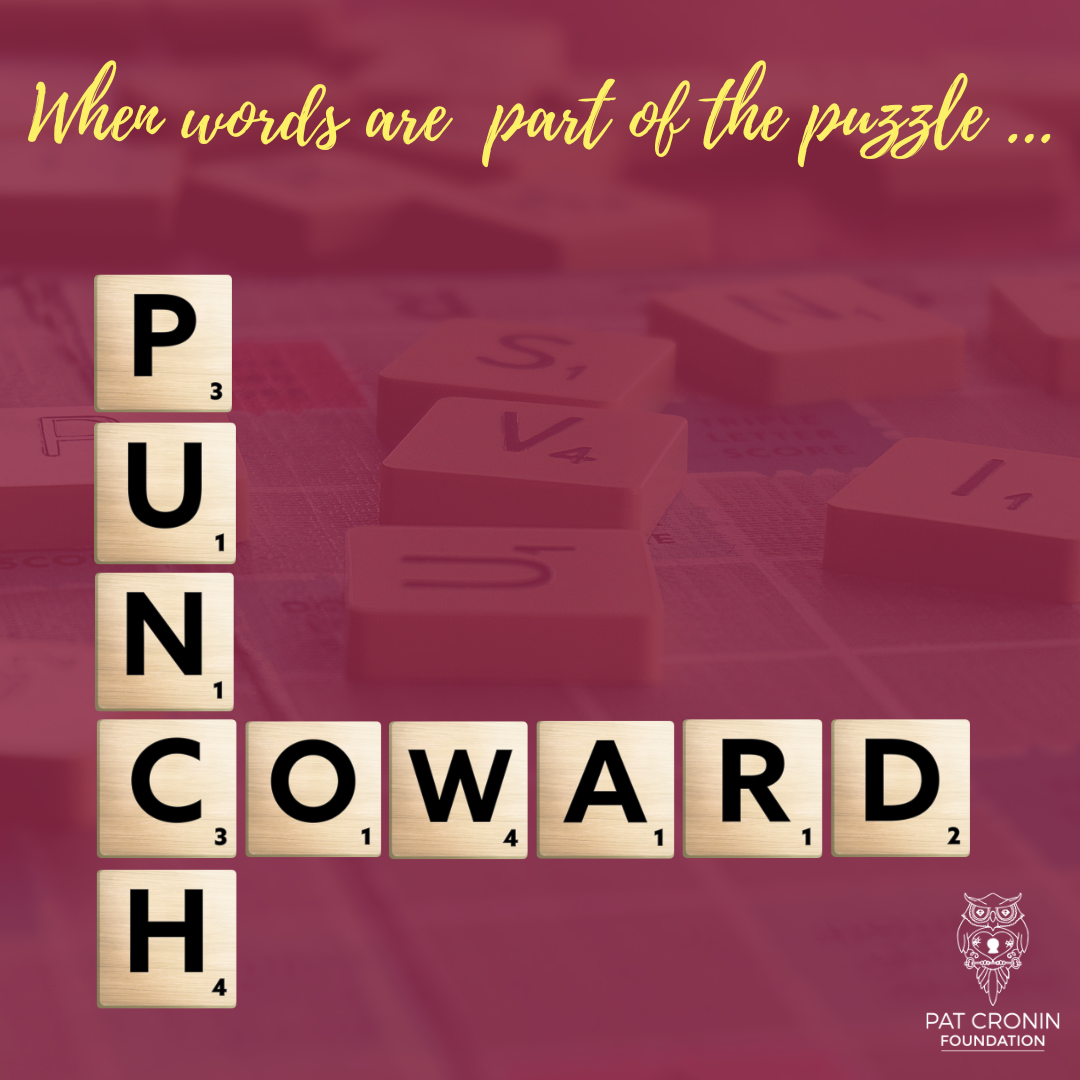